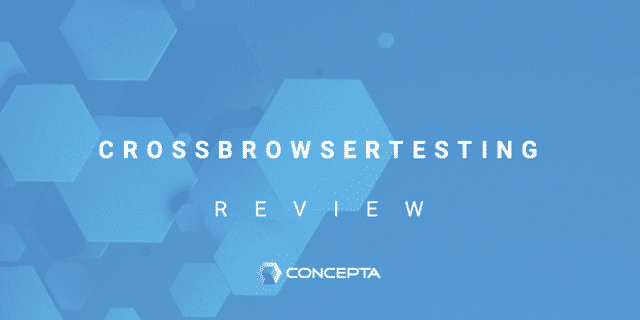 CrossBrowserTesting Review: The Good, The Bad, And The Alternatives

CrossBrowserTesting is a cloud-based testing platform for websites and apps.

It provides powerful tools for exploring how a website performs on a variety of devices and browsers, and it’s considered a staple for many developers.

Why is CrossBrowserTesting Important?

User experience has taken center stage in the battle for customer acquisition and retention. It’s more important than ever to make sure every user is having the same experience, no matter where they are or how they get to the website.

The quest for uniformity is made harder by the huge variety of browsers in use. Besides the “Big Five” (which, as of 2018, include Chrome, Firefox, Safari, Internet Explorer, and Edge) there are scores of alternative browsers that may be more common within a particular customer base.

To complicate matters further, new internet-ready devices are being invented every day. Developers have to plan for traditional computers and laptops as well as tablets, phones, and wearable devices. Even fitness equipment and some appliances can access the internet now.

There’s no practical way to manually test every browser and device that might be used by customers. However, it’s risky to ignore the less popular options. The average person uses 3 different connected devices over the course of a day.

If they happen to find the site or app on an unsupported platform, they’re unlikely to return through another device later.

CrossBrowserTesting provides a range of manual and simulated testing services on more than 1,500 devices and browsers. Developers use it to check whether their clients’ websites are rendering properly across the board.

What developers like about CrossBrowserTesting is that it’s easy to use. They can test their layouts on a huge combination of operating systems, browsers, and resolutions simultaneously. It shortens the amount of time they have to spend on testing without lowering quality.

CrossBrowserTesting uses real browsers instead of emulators. It’s also one of the very few tools offering manual testing on physical iOS and Android devices, with coverage for the Nexus, Galaxy, Tab2, and hundreds of other devices. Developers can swipe and interact with the devices during their tests.

Automated screenshot comparisons and testing videos give developers an overview of their site’s status. They can perform apples-to-apples comparisons and quickly identify platforms that need more attention.

Virtual machines for mobile devices can be painfully slow (though they’re still faster than individually testing each device). It’s also not easy to edit end to end testing.

Some developers have also had problems with CrossBrowserTesting’s documentation. They report typos, structure issues, and some misleading examples that caused unnecessary confusion.

What Else Is Out There?

While CrossBrowserTesting is a powerful tool, most developers use a variety of different tests to get fuller coverage. Here are some popular alternatives:

SmartBear owns both CrossBrowserTesting and TestComplete. TestComplete offers more powerful testing options across technologies, and it’s easier to create tests. However, the code editor provides badly-formatted code and some users have struggled with frequent crashes.

BrowserStack is a testing platform that boasts a large variety of developer tools and supports many different devices and browsers. Reliability has been an issue for some, though: the test client runs differently on different operating systems, and the virtual machines reject new tests instead of queuing them when overloaded.

Cypress.io is an end-to-end testing tool built on Node. It’s easy to debug with a highly supportive community. The problem is that Cypress doesn’t support more than one browser instance and doesn’t support native events (such as file uploads).

In a world where digital transformation is key to staying relevant, developers are pushing to work faster without sacrificing quality. CrossBrowserTesting helps them stay on schedule while still creating a dynamic end product. With results like that, it’s not going anywhere.

At Concepta, we know that testing isn’t just something to cross off a checklist. It’s an integral part of development that directly impacts our clients’ bottom lines. That’s why we use test automation tools like CrossBrowserTesting to make sure users are getting the same great service wherever they are. Set up a free, no obligation consultation to discuss testing your company’s products to find out how they perform in the real world!