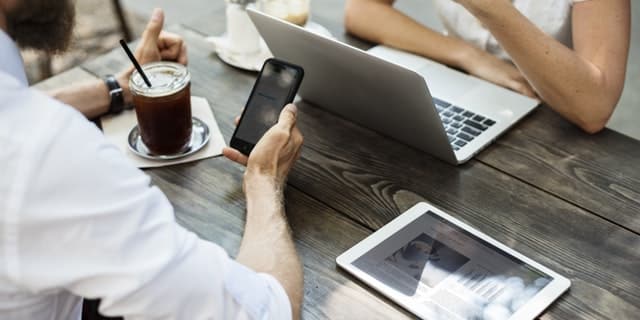 Mobile apps are an inescapable part of how today’s consumers interact with their favorite brands. 90% of phone time is spent within apps, and that time is financially productive. Smartphone conversion rates are up 64% compared with desktop conversion rates, with tablets maintaining the highest add-to-cart ratios on e-commerce websites.

Numbers like this are driven by the superior customer experience
. They’re more intuitive to use, give a higher sense of security, and boost repeat business. Essentially, having a mobile app is a no-brainer- but companies also need to decide what type of app will suit their needs, and that’s where it can get complicated.

The Challenge of Building an App

First, building “an” app is a deceptive term. There’s no single format for downloadable mobile apps that works on every device. Unless the app is intended for a specific group who will all be using the same equipment (like employees on company iPads), developers need to account for the variety of platforms used by their customer base. Building an app involves either building separate native Android and iOS apps or building a hybrid app with a platform specific wrapper.

Which is better? As is often the case in software development, the answer depends on the specific project.

The Benefits of Native Apps

A native app is written for a specific platform, like iOS or Android. Because it’s made for that platform alone, it can utilize traditional features of that platform to create a more intuitive interface. Seemingly minor features like drop down menus or button orientations provide a familiar interface and a better user experience.

Being built on a specific platform takes worry over vendor library support out of the picture. Apple will continue to support Swift, for example, so developers won’t have to worry about longevity or code becoming obsolete.

The Challenges of Native Apps

Native apps are more labor-intensive and expensive than hybrid apps to develop. Companies have to build and maintain a separate codebase for each platform. They’ll also
, since programmers tend to specialize in platforms.

Building on different platforms slows down the development cycle as well. Developers can sometimes get around this by releasing an app on one platform with the other to follow as it’s done, but that method runs the risk of alienating users of the platform they release later.

The Benefits of Hybrid Apps

Hybrid apps were created to combine the performance of native apps with the faster development cycle of a web app. Essentially, developers create a web app with custom wrappers for each device. This method is multi-platform friendly; scaling it to another platform is as simple as creating a new wrapper.

The Challenges of Hybrid Apps

Hybrid apps come close to the performance of native apps, but it’s true that they can’t quite match it. While they’re fast enough that users won’t notice much difference in average apps, it will be obvious the more complex an app becomes. Hybrid apps generally have lower storage limits and don’t perform as well offline.

UX takes a hit from platform-specific wrappers. The webview is platform agnostic, meaning users won’t have the familiar “feel” they’re used to and can’t navigate the app in an intuitive way. Wrappers can cause problems during development, too, driving up development times to near native levels.

A good example is Evernote, a freemium hybrid app used for productivity and organization. It’s cross-platform in a major way, supporting most popular platforms (macOS, iOS, Chrome OS, Android, Microsoft Windows, webOS, etc). Evernote is praised for its intuitive design and responsiveness. It’s a good case study of playing to the strengths of hybrid apps to create a native experience at a hybrid cost.

There are times when a native app is the only sensible path. If UX is a key requirement, any app that leans heavily on device features needs to be native. Trying to skate by with a hybrid app will only frustrate users. That’s dangerous in a world where 52% of consumers decrease brand engagement after a bad mobile experience.

One well-known example is the popular mobile game Pokémon GO. The game uses the accelerometer, gyroscope, and compass to power in-app features like catching virtual Pokémon and hatching eggs. Swiping is used for play and navigation. The game needs to be fast enough to keep play smooth enough to satisfy players in all coverage conditions. There’s no feasible way to meet those requirements with a hybrid app.

The choice between hybrid and native can make or break an app. Creating an experience that doesn’t meet consumers’ needs is worse than not having an app at all. On the other hand, there’s no point in blowing through the development budget for a native app when a hybrid app would work. Being frank about your project’s needs when meeting with the developer will position your app for success.

Need another option? Check out
.

Wondering if a hybrid app could save your company money?

Or is optimal performance from a native app a non-negotiable?

A free consultation with Concepta will help you decide what kind of app you need!